Ap'Structure or how to monitor your structures in real time

Expert opinionTop News12/09/2020
Recent dramatic events have revealed the importance of knowing the real state of infrastructure and construction, and more particularly of bridges. Apave, which has long experience of these markets at European level, is innovating with Ap'Structure, a unique solution for real-time monitoring and predictive maintenance of structures. 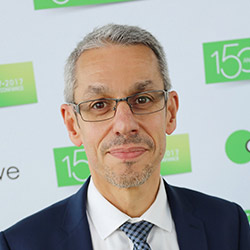 Jean-Luc Nectoux graduated in civil engineering (INSA Strasbourg) in 1991. He worked for several risk management companies and joined Apave in 2008, where he is currently in charge of the Infrastructure and Construction Sector line.

Hello Jean-Luc: you speak about all types of infrastructure but today we are going to talk more specifically about bridges. Since the collapse of the Genoa viaduct in 2018, we have heard a lot about ageing infrastructures. What is the state of play and how does France position itself?
After the Genoa tragedy, France took stock of its structures and according to this report 7% of French bridges are at risk of collapse. Overall, just over 10% of bridges in France are in poor condition and pose safety and availability problems for users. It should be noted that bridges in France represent nearly 250,000 structures, whether they are managed by local authorities or companies such as major transport companies or motorway networks for example. Like all constructions, they need to be monitored and maintained and the volume is considerable. The regulatory controls in our country impose visual inspections, which is good, but we must also go further. There is a very strong awareness of the need to move from a curative maintenance approach when a major problem is identified to a preventive approach. But this is not a Franco-French issue, far from it. In Germany, for example, a vast study published by the Employers' Association of the Construction Industry estimates that three quarters of the 39,100 bridges on German federal roads are not in "good condition" and even that one out of every two bridges needs to be rehabilitated urgently. In Italy, more than 1,400 bridges in the network are ownerless and therefore not maintained. Half of the structures have reached the age of 40 years and almost one in four has passed the half-century mark. This is therefore a European, if not global, issue.


What is the reason for this worsening of the situation?
It is difficult to say. The fact is that many of the structures were built several decades ago and were not designed to accommodate such a large volume of traffic and tonnage. There is an important demographic issue: there were 53 million French people in 1975, today there are 67 million, i.e. 12 million more. This means more vehicles and more goods transport in a world where trade is increasingly important. In this respect, I note that the most deteriorated structures are also the most stressed. There is also a clear climatic issue with very significant temperature variations in very short periods of time, with periods of flooding followed by periods of drought, all of which weaken the structures. It is difficult to say whether the situation is getting worse and to cite all the possible causes. On the other hand, it is certain that some structures are ageing prematurely and that they do not or no longer behave as they should. This is the whole point of monitoring them continuously and in depth, beyond a simple visual inspection, for which we need technology.

You have launched Ap'Structure, what is it about?
Ap'Structure is a real-time monitoring and predictive maintenance solution for the European market. It is a SHM (Structural Health Monitoring) solution that uses cutting-edge technology to anticipate risks on structures and guarantee their solidity and thus the safety of people.

In concrete terms, it is the alliance of 2 technological and technical expertises:

Ap'Structure is therefore a combination of highly innovative technology and proven know-how to assist decision-makers in managing their assets in order to monitor their ageing by knowing their actual condition precisely. This also allows our clients to optimise their investments by anticipating and prioritising the necessary maintenance and/or renovation operations.

Ultimately, it is preventive maintenance that is put in place with Ap'Structure to identify any existing pathologies, treat them, and thus avoid operational stoppages of the structures and extend the life of the structures. We have talked a lot about bridges, but this solution also works with other structures such as dams, stadiums, buildings, tunnels, motorway interchanges or even nuclear power stations.